My short one day in Sorong was spent well as I visited Dum, an island only 10 minutes away by a wooden boat trip from the city.

Dum is just a usual small island, nothing fancy, but what made me feel warm was the people. As my friends and I traveled around the village on a pedicab (there is no car allowed to enter the island), people looked so nice to visitors. They smiled at us, some of them greeted us genuinely. Like this little girl:

Sometimes I asked the pedicab driver to stop by, so I could get off and talk to them. This young fisherman just came back from the sea with his father. Look at the Baubara fishes he had in his hands. Yumm!

Not far from where I met him, I saw an old lady sitting in front of a table. Later on, I knew her name is Mina. People called her Mama. I came down from the pedicab and talked to her. Mama didn’t speak much but a younger woman next to her explained that she sells areca nuts. It is the nut that local people use for chewing.

Chewing areca nut is not new in my knowledge but I never taste it before, so I took the time to tried one that day. A man showed me how to chew it. “You might be surprise with the taste in the beginning, but if you can get through that, the taste will change and it become sweet,” he said.

I started to chew and unfortunately did not make it. Everyone laughed at me like I am a loser. “No problem. Later on, if you know how good the taste is, you will get addicted,” that man said. 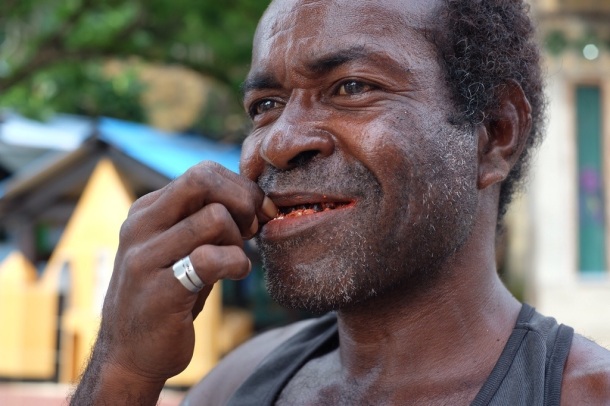 After trying the areca nut, my friends and I went back to the harbor. In the Sorong harbor, we met a girl wearing kind-of sailor uniform. Her name is Temte. I thought she is a sailor woman. “No, I am not. I studied fishery in high school. I want to be a fishery expert. Helping people here on aquaculture,” Temte said before she hopped in to the boat. She headed back home to the island of Dum to spent her holiday from the boarding school.